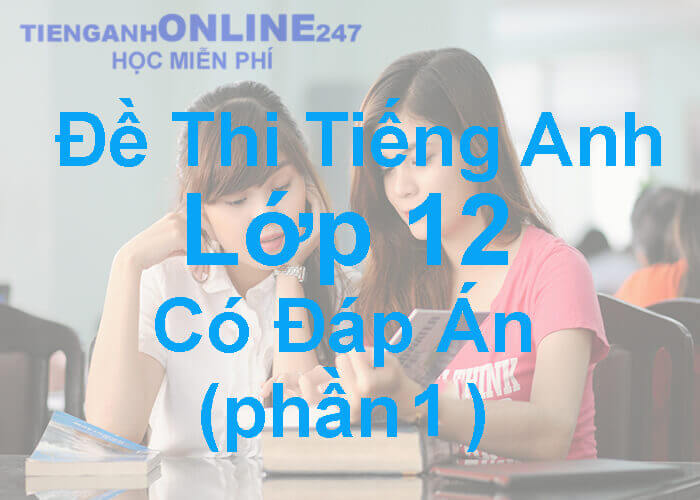 5.A. knowledge B. bracket C. although D. neighbor

Bài 3: Choose the best answer to complete the blank in each of the following sentences.

A.has been painted B. was painted C. painted D. has painted

22.When being interviewed, you should concentrate on what the interviewer is saying or asking you.

A.be related to B. express interest in C. be interested in D. pay attention to

A.“ Romeo and Juliet” were written by Shakespeare in1605

B.“ Romeo and Juliet” was written by Shakespeare in 1605.

C.“ Romeo and Juliet” was written in 1605 by Shakespeare.

D.“ Romeo and Juliet” were written in 1605 by Shakespeare

A.have been totally destroyed C. have totally been destroyed

B.has been totally destroyed D. has totally been destroyed

28.My sister is often sick because she doesn’t do physical exercise.

A.If my sister does physical exercise, she won’t often be sick.

B.If my sister isn’t physical exercise, she does sick.

C.If my sister did physical exercise, she wouldn’t often be sick.

D.If my sister wasn’t physical exercise, she would do sick.

31.In spite of his poorness, he is honest.

A.though B. because C. because of D. in spite of

35.The man who is speaking to John is my brother.

A.The man spoke to John is my brother.

C.The man spoken to John is my brother.

B.The man is speaking to John is my brother.

D.The man speaking to John is my brother.

A.written B. writing C. which written D. that wrote

37.I often listen music when I have free time. A B C D

38.We spent a week to preparing for our concert. A B C D

39.The phone rung while I was washing the dishes. A B C D

Bài 5: Read the passage below and choose the best answer ( A, B, C or D ) to each question.

video-game industry. If video games are going to one of the most attractive features of future interactive

systems, it is essential for producers to know what types of games to make, how best to present such

games on interactive video, and how to ensure that such games maintain their fascination for people.

Above all, it is vital to build up detailed profiles of people who are addicted to video games.

Until recently, the chief market for video games has been boys aged eight to fifteen. The

fascination for interactive video games is seen in its purest form in this group. Video games appeal to

some deep instinct in boys who find it impossible to tear themselves from them. Schoolwork is ignored,

health is damaged and even eating habits are affected. Girls of the same age, however, are entirely

different, demonstrating far greater freedom from the hold of video games. Quite simply, they can take

video games in their strike, being able to play them when they want and then leave them alone.

A.finding the best ways of continuing to attract people

C.learning about drug to which people are addicted

C.girls between eight and fifteen

B.Boys and girls from eight to fifteen

C.Girls and boys above eight

D.Girls and boys below eight

Bài 6: Choose the word or phrase ( A, B, C or D ) that best fits the blank space in the following passage.

Speech is one of the most important ways of communicating. It consists of far more than just